How can we help you today?

The Aqua Scanner scans images one at a time. An image is typically scanned in about one minute.

When Aqua is first deployed, the Aqua server is configured to perform scanning of all images. As the number of images grows, you will probably want to add additional scanners, in the form of scanner daemons, to handle the additional workload.

This topic explains how to deploy an additional scanner daemon for the image scanning. The scanner CLI (Command Line Interface) can deploy additional scanners to the Aqua server that can handle registration scans. This allows the scan load to get pushed from the console to the scanners for more throughput. You can see the deployment of new daemon scanner on the Aqua Security page, Administration > Scanners. The new scanner will be deployed in daemon mode as a running container and the Aqua console will route scans to the specific scanner when it is available and there are enough pending jobs in queue with other scanners.

When the Server needs an image to be scanned, it sends a request to one of the scanner processes that is not busy. This implements a basic load-balancing mechanism. The request includes:

The actual image scanning performed by the daemon is affected by the Scan options that have been configured by your Aqua admin.

After daemon scanner is deployed, Aqua admins can reserve this specific scanner with any registry integration manually. This action allows images from the specific registry scanned using the scanner exclusively. This will also helps reducing image scanning load on Aqua server by distributing image scanning jobs to various scanner daemons as configured.

The scanner should communicate with the registry directly, to obtain the image for scanning. For various reasons, including those of physical deployment and data security, you can optionally configure each daemon to work only with specific image registries. Each scanner can be configured individually as follows:

When the daemon receives a request for scanning an image, it performs one of the following actions:

The following examples show how the flags operate. Each flag can accept either a single registry name or a comma-separated list of registries. You can also include either or both flags more than once. To be generic, the term "list" below is used to denote all the registry names supplied with the respective flags.

Add a Scanner for Linux environment

The Linux version of the Aqua scanner is deployed as a container on a Linux host. You should use it to scan Linux images. To add a Aqua scanner:

7. Click the Copy button next to the command to copy the docker command. 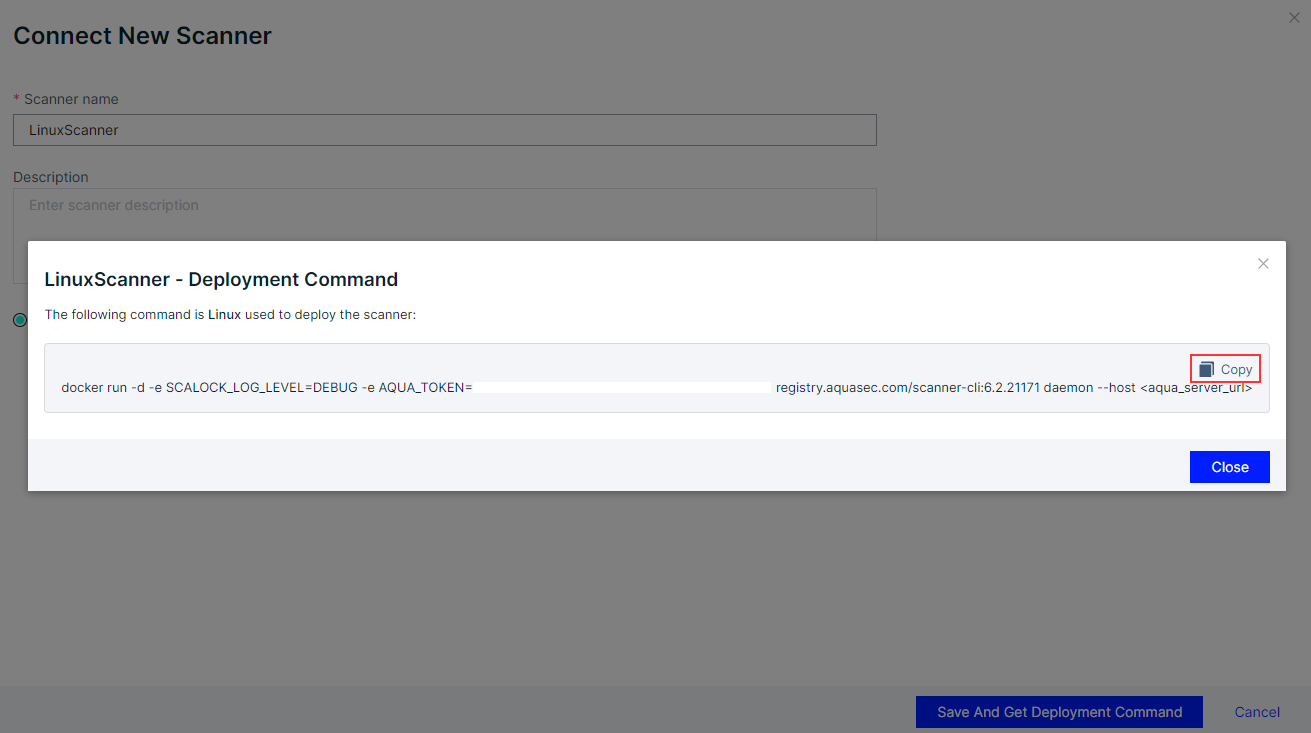 10. (Optional) Add the required flags from the Command flags section below to apply the respective configurations to the new scanner. Following is the sample command syntax to deploy scanner as a daemon to the Aqua console on your Linux host.

In the above command, the -R flag is passed to dedicate this scanner to specific registry for image scanning.

11. Run the command. This action will start adding an additional scanner on the host.

You can see that the new scanner is registered in the Aqua platform and shown in the scanner list with the last heartbeat. You can repeat this procedure to add multiple scanners, as required.

Add a Scanner for Windows environment

The Windows scanner is installed on a Windows server. You can use it to scan images based on Windows. To add a scanner for Windows environment:

7. To use the Executable command to deploy a scanner, download and setup Aqua Scanner Installer for Windows. For more information, refer to Scanner Command Line Interface. 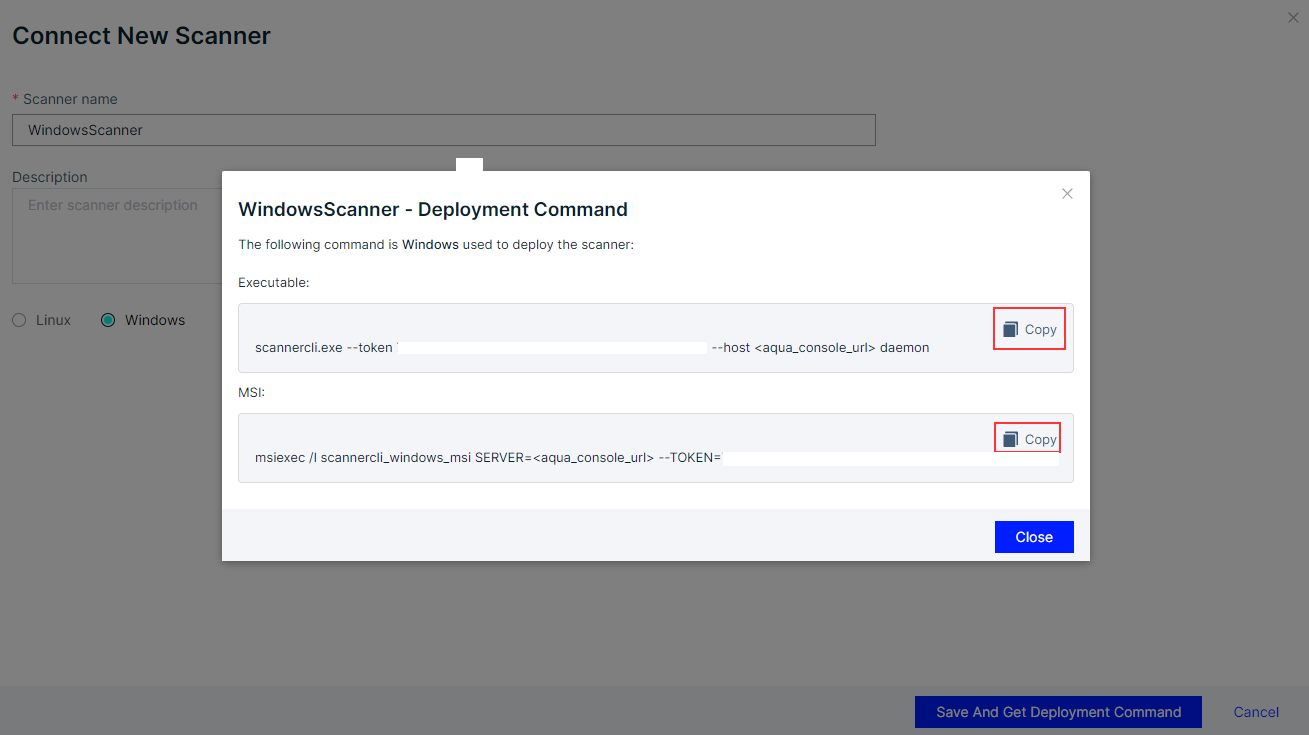 11. Run the command. Following is the sample command syntax to deploy scanner as a daemon to the Aqua console on your Windows host.

12. To use MSI command to deploy a scanner, create a folder c:\Aqua on your Windows server and copy and extract the installation file AquaScannerWindowsInstaller*.msi to this folder.

13. In the MSI textbox, click the Copy button to copy the MSI command.

14. In the command prompt from the location of the MSI file, run the following MSI command after substituting the <aqua_server_url>.

You can see that the new scanner is registered in the Aqua platform and shown in the scanner list with the last heartbeat. You can repeat this procedure to add multiple scanners, as required.

Following is the list of different flags used while passing daemon command to deploy a new scanner.

This flag is used to encode the scanner while deploying to the Aqua console. Valid values are zlib (default) and snappy. In the following command, snappy is passed as file-encoding.

You receive scanner id from Aqua console as output response.

You can get help on the scanner daemon argument, by running with the -h or --help flag as shown below:

After you add the required scanner daemons, you can find the list of all scanners deployed from the Administration > Scanners page. You can find the following information in each scanner:

If you add scanners, your Aqua admin can configure the Aqua server to not scan images using the Aqua server itself, using the Only scan images with scanner-cli daemons (if exist) checkbox from the Settings page. If this action is performed, all images will be scanned by the scanners (scanner daemons) that you have added. This will reduce the load on the Aqua server. For more information, refer to Configure Scanning Options.